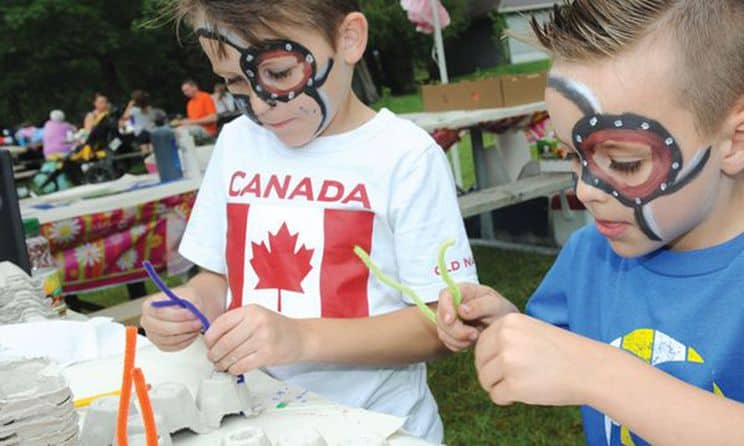 Residents were all smiles. In fact, as you walked down Main Sreet Saturday morning, a friendly billboard ad stuck on a merchant’s fence, suggested to have a smile. Instead of ripping off a phone number, residents were tearing off smiles.

Lawnchairs lined the curbs. Family and friends watched as the Clarington Concert Band led the way for the walking parade. The crowd dressed in red and white, grew larger and larger as they marched from the fairgrounds to the park.

“This is amazing. It brings everyone together. It’s the beauty of a small community,” said Rhonda Story, resident of 19 years.

Cheryl Reid has lived in Clarke Township for more than 40 years. She brought her grandson and grandaughter to the event.

“We just love Canada Day, cause were Canadians, eh,” she chuckled. “It’s a Canada Day celebration for Orono.”

As the parade made it’s way through the streets, residents stopped at their neighbours’ houses to shake hands, say hello, and share candy.

“I’m related to a big part of Orono. My whole family lives here. I love this small town. Everyone knows everyone,” said born and raised resident, David Landman.

Mr. Landman’s three-year-old son Jack and neice Eva were dressed up as prince and princess of Buttercup Hollow.

Orono resident of 47 years, Carole Bailey, laughed as she looked back at her younger years. A black and white photograph from a 1978 newspaper clipping showed her as a winner of the Orono Ladies Tennis Club.

“I don’t remember the tennis outfit,” she said while laughing. “Awe, I loved it.”

The sun was peaking through the clouds with rays reflecting off Wilmot Creek, as people stood on the park bridge watching the water run beneath them.

Pam Lancaster, stewardship technician of Ganaraska Conservation Authority was at the celebration educating kids on the creek’s insects.

Ms. Lancaster picked out mayflies, caddisfly and side swimmers, also known as “scuds,” for the kids to examine.

“Insects tell us how healthy a stream is. All of these indicate good health,” she said.

“It’s nice to see that these kids interest is away from the TV and video games,” said Ms. Lancaster.

It was even more of a celebration for him. It was Orono’s anniversary, Canada Day weekend and above all, his 50th birthday.

“The history of Orono is what makes it,” said Mr. Armstrong. “The park’s baseball games, swimming pool, the gardens. I had my wedding photos done down there.”

Mr. Armstrong used to be a part of the Kinsmen Club for 12 years before it folded back in 1995.

“We use to have street dances, to raise money for the arena. It was a wonderful time.”

According to Ms. McCartney, at the end of the first World War, citizens of Orono decided to commemorate the end of war and remember the ones they had died. In 1923, The Orono Community Memorial Park was built. Park founders rasied funds for concerts, dances, street fairs and much more. Shortly after, two tennis courts, a swimming pool and a baseball diamond was constructed.

When the Orono Forestry Station closed in 1996, the park began to feel it’s loss.

Ms. McCartney could recall a time when her children would play at the park.

“Things were runned down a little, it broke my heart. So I said you know what, we’re going to fix it,” she said.

“Orono has a lot of history. Everyone has a story, and I want to keep these stories alive.”

The park is very much alive now as it has welcomed a new baseball diamond, brand new picnic shelter and fresh new garden beds.

“I am so happy,” said Ms. McCartney. “See, Orono looks after Orono.”